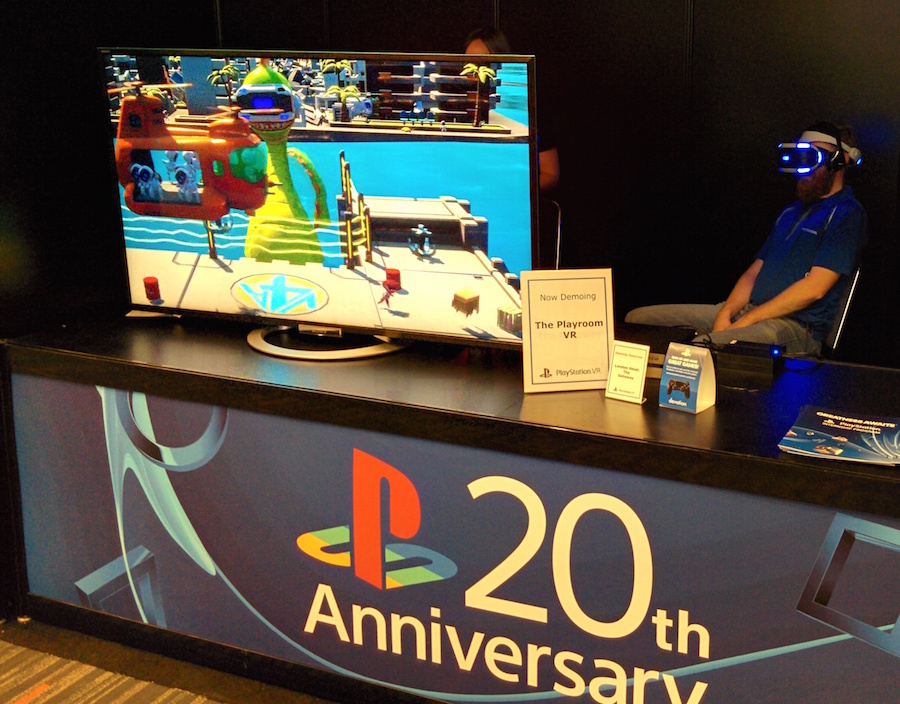 Like several times before, we were volunteers for this year Montreal International Game Summit (MIGS). A great event! this event allows us to keep up to date with the latest trends within the game industry. This year the star was VR, which was all round. Minority media had a booth on which they showed their VR demos. Minority it’s a local (Montreal) game studio focused on creating VR experiences, his CEO (Vander Caballero) made a bold prediction during the MIGS:

The killer app for VR won’t be a shooting game, and that’s a good thing

Caballero doesn’t have an agenda against shooters, he just thinks there are better themes to build a game. We concur with this idea, however we also think that a shooter will eventually come to VR. Like any other content, if done well, it will be popular, whether that will be a killer app, remains to be seen. The temptation to make a shooter (and many more themes) on VR is too big to ignore.

Which leads us to Playstation VR. Sony had a booth showing their newest product: Playstation VR. In case you’re not ware of it, the PlayStation VR is Sony’s VR platform, which is based on a headset unit to display VR content on the players head. Playstation VR requires a PS 4, it connects to the headset via HDMI and USB. It appears the device will act as an splitter for HDMI, allowing images to be seen simultaneously on the headset as well on a TV. Sony did not confirm if this will be the final configuration, however there’s little reason not to believe it won’t be.

As I curious person that I am, I have enjoyed VR content for quite a while now, so even though is the latest new thing, I’m not that easily impressed when experiencing VR. That said, this was amazing! 🙂 It is by far the best VR experience I have had so far. Graphics were flawless and smooth, no motion sickness, nothing.

I played a demo on which I (putting the VR device on your head) was sort of a Godzilla, while a second non VR player threw stuff to me, by way of using the PS 4 controller and seeing it on the TV. I only had to move my head to avoid it, and then while in the city, I had to destroy the city by moving my head like it was hammer. I as a VR player had no control of the movement. The thing moved by itself, notice this is a recipe for motion sickness. Did it happened? Nope! Nada! Obviously the game was made to avoid motion sickness (among many other things), I speculate that the frame rate and refresh rate are tuned in order to avoid this uncomfortable feeling.

Even after finishing the demo, I still didn’t understand what was so different to the previous VR experiences (Oculus and Gear VR) that I had, that made this one so much better. After some days dwelling about it (yes, #firstworldproblems) I think I reach a conclusion on why. Hypothesis:

With Oculus and Gear VR, the image above, you see it as one image -not two- (you know, stereoscopic vision). But, the black border around the image remains, where as with the Playstation VR that black border was not present, and if it was, it was smaller, to a degree I didn’t notice it. At least that’s what I remember. Sony’s booth was always full, even though I was encourage by their team to come again a experience other demos, I couldn’t due to lack of time. The fact that the black border wasn’t present or it was small, increase the immersiveness of the whole experience, naturally making it better. That, on top of all the technical setting previously written.

Obviously we still haven’t experience the Steams VR, so the judge is still out there. Nevertheless, so far Sony has a good model on what a VR device should be. Hopefully this will only get better!