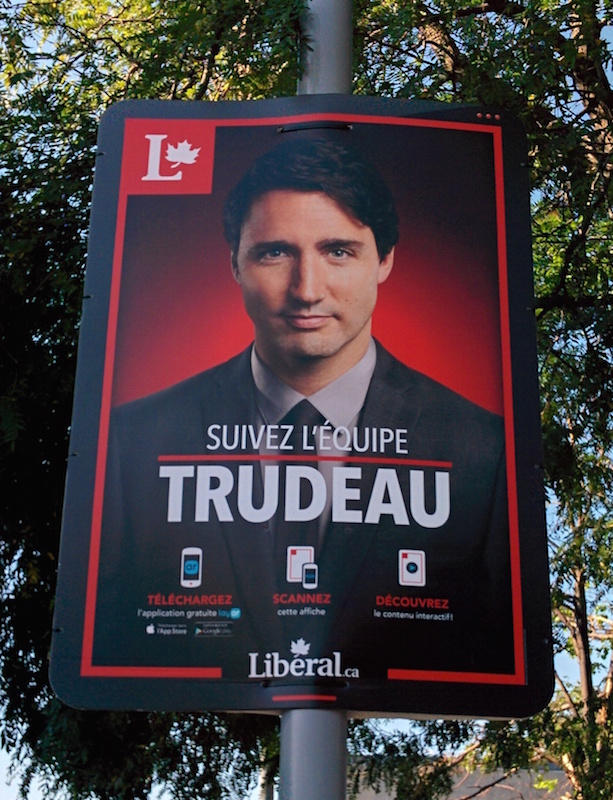 In the developed world, political campaigns are a challenge. People used to democracy, take it for granted, thus many show apathy for engaging in the political debate. As a consequence politicians have to use any medium available in order to get some attention from the electorate. Previously they have used TV, Radio and print advertisement, some have used QR Codes on their campaign ads. And, as augmented reality (AR) is a new medium, well, lets used it also!

Currently there’s a prime minister campaign here in Canada, there are five parties on the race: Conservatives, NDP, Liberal, Green and BQ. To our knowledge, only the Liberal party have chose to use AR in their campaign, with only one add, the one from their leader (of course).

To engage with it, the people have to use the Layar app. Once the app is opened, the engagement is straightforward, the app shows a video of him talking about how he’s going to save Canada! All politicians must do the same to their homeland! 🙂

The devil is in the details

Any engagement is good. For this case, campaign strategist decided to use just a video. It keep things simple and to the point. Needless to say they could have pointed to their twitter account, a web page or any other method to get more engagement with people. Layar is an online app, which means it requires network connection to function. In Canada, cell phone services are expensive, specially the data service. This video specifically has a size of about 24 MB. Depending on the subscription, watching the video right away can be a big or an insignificant thing. While most people won’t even bother to measure the size of the video, the size should be consider as it will affect the speed of engagement (if any, due to network speed) or if the person decides whether or not to see it. Admittedly, once a person opens the app, might as well go until the end and watch the video. In any case, using AR for this is great, as we have always said: the more people using it, the more it changes the behaviors and expectations on how to use our phones.

Ohhh… and if any other candidate for another party want to follow suit with AR, let us know, we can surely help! 🙂