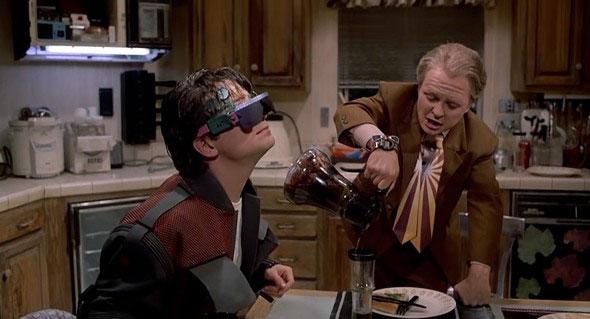 As you may know, Microsoft revealed their latest technology product: HoloLens, which -understandably- made a lot of noise on the media. Lets start by the one similarity they (Glass & HoloLens) have: They’re both -at their core- augmented reality products. Neither company calls them that way, nevertheless, they’re. They both overlay information on top of the real world, which fits perfectly with the definition of augmented reality. Microsoft chose the Holographic term, presumably for marketing reasons. Whether this works or not, it remains to be seen. But lets not forget that Surface is the name of two Microsoft products, first was the table, later the tablet. The point is, Microsoft marketing tends to have missteps -to put it nicely-. We’ll try to compare both -why not?-, as they’re trying to capture the same market with different approaches. All of this, with the little information available from both parties.

The first and most important characteristic is the obvious one:

HoloLens is a product while Glass is an experiment

This difference goes to the DNA of each company. Microsoft was born on a time where it was necessary to sell something to make money and to survive. Where as Google was born and made a business model where their products are free to use and the revenue is a direct consequence of people using those products.

As such, when the two companies innovate, they do it in different ways. When Microsoft innovates, it does it with a finished product intended to be sold (like Apple does). On Google’s side, their were born experimenting, mainly because web technologies allows them to do so. So, Google’s philosophy is not that profound in that regard, have an idea? Well lets try it and see how it goes, if it becomes a product, time will tell. Both companies have had their share of failed products, however, Google has had far more popular product -because they’re free-, being later killed -I miss you Wave-. So HoloLens is meant to be sold and as such it’s finished and proposed as a final device. Glass on the other hand, is made as an experiment, as such, it was meant to be iterative and none final. HoloLens will be sold to everyone who wants it, Glass may be sold to companies, or maybe the consumer, nobody knows for sure, not even Google.

Again, this goes to company roots. Microsoft was participant in the creation of the personal computer revolution. Up until this day, Windows remains their main product and cash cow, which is centered around PCs. Google is participant and main player of the mobile revolution. Their efforts are geared towards that. Naturally, both companies are going to develop products on which their DNA and expertise are strong. Even though, both products aim to achieve the same in similar -but not identical- ways.

By its side, Glass was made as an extension of your mobile device, needing your mobile -to some extend- to operate. Glass hardware was made to be as simple as possible, in order to save battery life and keep privacy at bay. Thus, that’s why Glass has a tiny screen meant only to serve one eye and its audio is also serving one ear. The information displayed by the device is meant to be an extension of your screen or capturing device (for the camera), at the same time being as little intrusive as possible. Glass hardware is based on the now defunct TI mobile platform, so its capabilities are those of a mobile device. Even when the new version of Glass comes out (using the Intel platform), it will still be based on mobile components. Glass was made out to be use outdoors as well as indoors.

HoloLens? It is made to be a computer in your head. All the components it has might belong to an relatively old PC, but it’s still a PC. As such, it is far more powerful in any way you see it. HoloLens is mainly meant to be used indoors, as an independent device (no PC nor mobile necessary). You’ll have images display on both eyes including sound for -also- both ears. The graphics capabilities are also significant. It even has a Kinect built in! which is the one that allows it to identify hands gestures. It remains to be seen, how battery duration will be, because with power, battery consumption also goes up.

With Glass, helpers were the first ones to appear and while optical recognition is possible, given its computing limitations, is has limited recognition capabilities. Nevertheless, industrial apps started to make inroads in Glass, but only lately. HoloLens by its part, is meant to be an industrial (work) helper, with all its capabilities. Also it can be a gamins device, or a viewing device, many more things are possible with HoloLens except going outdoors with it, on which Glass has the advantage. It is not that HoloLens can’t be used outdoor, but certainly for longer periods of use outdoors, Glass is far more comfortable. Not ignoring the fact of you walking with HoloLens on the street, is not that practical.

This is an obvios one, to develop apps for Glass, many of the popular OS platform (Windows, Linux or Mac) can be used, where as for HoloLens, Windows 10 will be mandatory in order to make apps for it. Again, this goes to the DNA of each company.

This is important, we know that Glass price could be lowered significantly from the ~1200$ Google was charging for it to explorers (i.e. beta testers). However, given all the technology included in HoloLens, for sure they’re not going to be cheap nor low cost devices, so we expect a premium to be charged for them, naturally reducing its initial adoption.

There you have it, those are the initial similarities and differences between these two amazing products that are shaping the way we use technology, the future for sure look bright! And we of course would love to be participants of that future!